Mark Winter is a London-based designer who is a colleague at my present job. He recently saw my blog and mentioned his job-hunting efforts. I found his story so full of lessons others might use I asked him to write some posts about it for AlwaysBeJobHunting.com. This is the third of three installments on Mark’s creative approach to finding a job in a terrible economy. Part I discussed losing his first job and early attempts to get more training to help in his search. Part II discussed his out-of-the-box thinking that involved creating a Facebook group to find work and offering a fee to anyone who got him a new job. Here, he discusses the results. In my next post, I’ll review the lessons you can learn from in his experiences.

The whole (Facebook group) experience was worth it. The general feedback from people I was getting was positive and the negative, while it did hurt, I soon began to ignore as the praise would soon drown it out. 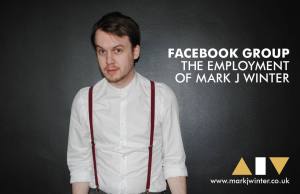 The biggest hurt of all that I won’t ever fully understand is the lack of response from potential employers. Of the hundreds (and that is by no means an exaggeration) of applications I sent, I received very few responses. I did receive quite a few automated responses acknowledging my presence but it was to the point I could probably recite the response in my sleep. I can completely understand that any company that advertises a job vacancy may not be able to respond to all applicants. Unfortunately, I will not accept that this is so easily acceptable. I genuinely feel for anyone in this position as it is incredibly hard and lonely not having your voice heard.

The good praise that I did receive? Lots of Tweets congratulating me on my ‘different approach to employment’ from people I’d never met, even a couple of radio DJs Retweeted my search. Sightings of my business cards around London (see photo). Direct emails with nothing but kind words and suggestions. People who’d heard about it and wanted to know how I was doing, even offering to pass my name to a ‘designer friend’ and wouldn’t even take the 10%. Every single word was a morale boost.

The campaign ran for a few months until eventually I found the job I am at today. Unfortunately, although I did receive lots of links to jobs, this one I found myself.

It wasn’t the successful end I’d hoped for but it was definitely a happy one. Eighteen months later and with a promotion to ‘team leader’ of six (including myself) wonderful graphic designers, I am content.

As for the 10% of my first months wages… That got pumped into my next project ‘Camera Obscura’ (www.cameraobscuraproject.co.uk) but that is another story for another time.
—Mark Winter