How Do You Go Back to Work After a Major Health Problem?

How do you face going back to work after a major health problem? That’s a question I’ve been wrestling with since mid-August when I discovered I had a major artery blockage leading to my heart and needed surgery to address the problem.

My surgery is called angioplasty and involves inserting a mesh tube called a stent into my artery to ensure blood flows normally again. I had it done August 13, and was back a work a week later. 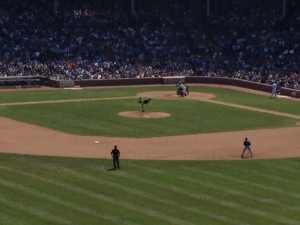 Ten days after surgery, I was watching a baseball game with coworkers. Really? Yes, really.

A week was enough time to recover physically, my surgeon assured me. What about emotionally? That isn’t his department, it’s something I, or you, have to address after such a traumatic event.

The first few days back, I was happy just to be breathing and walking without chest pains for the first time in several weeks. We actually had an office outing planned at the end of my week back, so that Friday I found myself watching a Cubs’ game. It was all a bit surreal, really, 10 days after surgery and watching a ball game?

Coworkers have since told me how weak I looked in those first days. On more than one of those days, I had to keep asking myself if I was really alive and not just dreaming I was. Should I have stayed home longer? I think the longer I stayed home, the less likely I would have been to ever go back to work, the less sure I would have been that I could ever have a normal life again.

Work has helped me realize I am still alive. Oddly enough, we’ve also had a string of out-of-town visitors come see us in the weeks after my surgery, something that rarely happens other times. Having house guests kept me moving as well, and kept me talking about things other than my surgery. Medical procedures can take over your life if you let them.

My advice to you is listen to your doctor first, get psychological help second, and don’t cut yourself off from the world around you. The longer you do that, the more difficult it becomes to get back into it.
John N. Frank