I received the sad news Sunday morning that a cousin in New York City had died after four years of battling cancer.

With Mad Men back on the air this week, there’s been a flurry of newspaper and magazine stories talking about how the lot of women in the work world was starting to change in the 1960s. In my childhood world, my cousin Jeannette was always my symbol of the changes going on in those days. 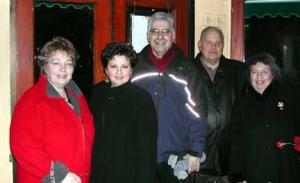 My cousin Jeannette, far left, with me, third from the left. and other cousins in happier times in 2005.

She started high school when I started grade school in September 1959, so the early 1960s were her time to go to work, as so many young women did then. But she wasn’t content to just be a secretary waiting for some guy to marry her. She worked in a bank and, I think, became a manager, something unheard of for a woman then.

She always seemed to be breaking the rules in those days, rules that seem so silly today. I remember, for example, the uproar when she talked about getting an apartment in Greenwich Village, the bohemian section of Manhattan. She relented on that one, continuing to live with my aunt and uncle.

She had her own car, a Volkswagen Beetle, which in its time also seemed rebellious and a little wild. She would suffer through a major accident in that car that left her with a small scar, on her forehead I recall, that she would cover up with different hairdos.

She always encouraged me, the difference in our ages never caused her to treat me like a little kid at family get-togethers. Later, after my divorce, she one year hosted my mother and me for Thanksgiving dinner when I otherwise might have stayed alone in Chicago instead of flying to New York to be with family.

I last saw her a few years ago when the hope was that her cancer was in remission. I’ll cherish the memory of that dinner with her, her sisters, my wife and others.
JNF

This entry was posted in finding a first job. Bookmark the permalink.